POP or Gypsum: Which is the best false ceiling?

POP or Gypsum: Which is the best false ceiling?

False ceiling are secondary ceiling that are suspended from main ceiling. False ceilings are used to conceal excessive wiring and are an efficient way of making your home more aesthetically pleasing and clutter-free. Off late, false ceilings have become an integral part of home constructions. Homeowners are opting for false ceilings as a way of keeping away excess heat, cold, and noise. Whether you opt for a pop or gypsum false ceiling, you’ll realize that they are an undeniably useful element of modern interior design.

These False ceiling or secondary ceilings are either made of POP (Plaster of Paris) or Gypsum plasterboard. But today one will find Gypsum Plasterboard false ceiling being used majorly especially in main cities like Mumbai, Pune, and others. POP false ceiling is used very rarely today though but only in villages and rural areas.

Gypsum v/s POP: What are the differences?

Gypsum is hydrated calcium sulfate and its quality is perfect for long term use. They are available in a prefabricated form, which is manufactured in a factory and assembled on-site. Gypsum is mostly used in rooms that have large area space and require central air conditioning units.

Installing Gypsum false ceilings is easy, and the cleaning process is quite effortless as well.
The boards provide a seamless look, which means it is attached to your ceiling without too many joints
Since they are factory produced, the quality and consistency of the products’ finish is maintained
Cons:

Even though a gypsum false ceiling is quite easy to install, the whole uninstallation process can be quite tedious. If you ever have to repair the ceiling, it would mean breaking the whole thing down.
It’s just a matter of time before moisture seeps into the false ceiling, it can be through leaky roofs or air conditioning pipes. This can lead to fungal growth or cause the ceilings to lose their shape. To avoid this inconvenience, it’s best if you opt for moisture-resistant boards.
Gypsum boards cost more than POP
As time goes on, a gypsum false ceiling may show signs of cracks around the joints. These cracks may appear due to slight movements in the false ceilings that are caused due to ceiling repair, cutting holes for light and fan fixtures, or in places where the ceiling meets the attached walls.
POP ceilings:

Plaster of Paris, also known as POP, ceilings are quite popular because the homeowner can decide on any design they want. It’s usually available in a powder form that is made into a paste and put up on the ceiling. The paste is manipulated in the design that the homeowner chooses, and it’s applied to a chicken mesh so that it stays afloat.

POP is quite durable with minimal wear and tear.
They can be flexibly applied to corners and be shaped to any design of your liking
POP is 20 to 40 per cent cheaper than gypsum boards

You need to have skilled and experienced labour to handle POP designs, otherwise, you won’t get the desired outcome.
There can be wastage, due to excess mixture, and it can leave the site messy as well.
The POP ceiling can only be installed once it’s perfectly dried.
POP vs Gypsum: The Final Verdict

In most urban cities, Gypsum is the material of choice of false ceilings because the cost has little impact on the consumer. Since the pros outweigh the cons, in terms of finish, installation process, and cleanliness, homeowners are willing to invest in it even though it comes at a higher cost. Also, if the design is tedious or complex, which means if it involves organic forms or multiple layers, gypsum will get the job done most efficiently. The reason homeowners choose gypsum is that it’s time-saving, and it pairs well with other materials like glass and plywood.

It’s always best to hire an experienced interior designer and follow their suggestions on choosing the best false ceiling, pop or gypsum. Here are some of the popular suggestions that are made by designers, when it comes to false ceilings:

If you want quality materials on a budget then its best that you select a peripheral ceiling design and use gypsum boards.
It’s best if you add a false ceiling only in some parts or only around borders to the existing ceilings. This way you can keep the original ceiling, in most places, and it will make your room feel more spacious while introducing a design feature.

Even if you want to invest in a gypsum false ceiling then ensure that the design scheme includes other materials like plywood and glass, if needed. 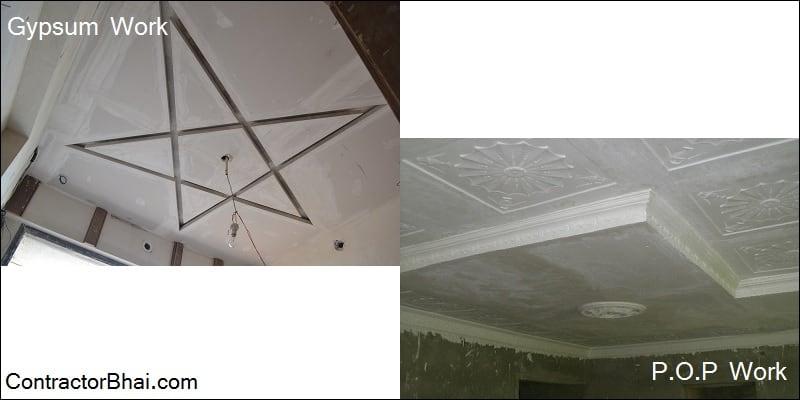